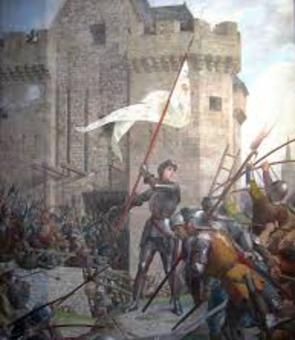 Below is the synopsis of Joan of Arc: Gabirella's Story:
​
​      When a young woman rides through Gabriella's Dubois' village rallying her countrymen to join the fight against the English invaders, Gabriella is determined to help her country. She learns that the woman is Jeanne D'Arc, from the region of Lorraine, who many believe is the girl the great wizard Merlin, prophesied will save France.
Coming from a long line of herbal healers, Gabriella is anxious to help the wounded and sick soldiers. But if is not so easy for her to join, being a woman. She is first turned away by the nefarious Captain Morissette, and then, crushingly by Jeanne D'Arc herself.
But Gabriella does find a way to enlist and after she saves Jeanne D'Arc's horse, Beau, from thieves, they form a friendship.
Orleans, a critical gateway city on the Loire River is under siege. If conquered, it would be a deadly blow for the French, as the enemy could then spread throughout the rest of France. Being told by her voices that she must first rescue Orleans to save France, Jeanne D'Arc slips past the English troops, leading her army behind its walls. She fortifies the city's garrison and brings food to the starving inhabitants.
As the two armies face each other, she rallies and encourages her soldiers, and they push the English back. It appears they will win until Jeanne D'Arc is hit in the shoulder by an arrow and is seriously, if not mortally wounded. Later that day, the retreat is sounded at Orleans, but Jeanne D'Arc revives herself when she hears it, and charges back to the front line. Inspirited that is alive, and once again their leader, the soldiers overthrow the English and Burgundians, freeing Orleans.
Being medically minded, Gabriella is concerned for Jeanne's mental health as she talks of her voices. But she is torn, because Jeanne keeps making predictions and has prophesies that come true, exactly as she says. Gabriella vows to watch out for Jeanne; not only her health, but from Morissette, who she believes may be jealous and out to sabotage the young captain.
Being victorious at Orleans, Jeanne D'Arc wants to keep up the momentum and go after the enemy, but Charles VII, The Daupin and ruler, unexplainably stalls and wastes time. Jeanne becomes discouraged, and tells Gabriella that her voices have told her she has one year, maybe two left.
Jeanne stays at Charles' court, while Gabriella stays behind, and slowly gains the doctor, Rousseaus's trust. He teaches her all about the humors and bloodletting, but does not allow her to use her herbs and tinctures.
Charles finally agrees to Jeanne's plan of being crowned in the grand city of Reims. At his coronation, Jeanne D'Arc stands proudly by his side.
Encouraged that he is now king, and will act as king, Jeanne soon grows frustrated as he once again stalls, signing a fifteen day truce with the Duke of Burgundy.
The young female captain is finally allowed some battles and one day she is captured outside the gates of Compiegne. Gabriella and her friends Papin and Flori, are captured as well. Gabriella cleverly finds a way to escape.
As Gabriella waits for any word of Jeanne, she keeps an eye on Morissette. She becomes convinced that he is out to get Jeanne, and may have even had something to do with her capture. With Gabriella's trained eye, she notices Morissette's red and swollen hands and the debilitating condition he has. She will help him with a tincture that she has prepared for him if he will help free Jeanne. He refuses and so she doesn't give him the herbal remedy. She needs to have something to use as leverage against him, as he dangerously has something over her, that if disclosed, could get her killed.
Finally, a trial begins. In court Jeanne proves herself as smart and clever as she was on the battlefield. Her judges grind her down for nearly five months. In May of 1431 they declare her guilty of heresy and she is condemned to burn at the stake.
Being one of her doctors, Gabriella is able to visit her in her cell. She has proven herself to her mentor, Rousseau, and he finally believes her herbs and natural remedies can help.
As they say good-bye in her prison cell, Jeanne tells her that no matter what to 'have love in your heart'. Gabriella witnesses Jeanne burn, and is crushed with sorrow. As shock engulfs her, she makes her way out of the courtyard with Rousseau supporting her. She sees Morissette, who appears uncharacteristically remorse. He tells her that he should have done something to save Jeanne. Gabriella remembers Jeanne's words, have love in your heart, and gives Morissette the herbal ointment that will help his condition.
Because of Gabriella's gift, Morissette pays the ransom for her friends Flori and Papin, and they are released. She was not able to save Jeanne, but she was able to save her two friends.
Gabriella buries Jeanne D'Arc's famous sword of Fierbois, outside of Paris. Jeanne had instructed her to bury it there and the next person to save France would find it.